White Lily Cookie (Korean: 세인트릴리 쿠키, seinteulilli kuki) is an NPC in Cookie Run: Kingdom. She is an Ancient Hero and is currently only briefly playable in the Prologue. She is a

Rear positioned unit; due to being unreleased, her unit type is unclear. Though it is believed her unit class will either be a support or bomber.

White Lily Cookie is first encountered in World Exploration in Dragon Hill during which she joins GingerBrave's party. She remains a party presence for the majority of the following Episodes, leading the cast toward various important locations. Eventually, she disappears from the main party at the end of Hall of Enlightenment, appearing only through flashbacks and illusions in Timeless Kingdom and the Tower of Sweet Chaos Story.

"A solitary beam of moonlight shines in twilight. Like a pale lily, touched by the softest drops of rain, a Cookie silently enters the world. Her serene eyes reveal a curious nature eager for knowledge. Wielder of the mysterious Lily Staff, White Lily Cookie has proven to be a trusty friend and ally during the grim Dark Flour War. Victory was achieved, but alas, a dazed White Lily Cookie awoke amongst a field of flowers with no memory of the past. A longing for

Pure Vanilla Cookie lingers on as a figment of the past, a memory within reach yet so elusive. Though a white lily's fragility invokes sympathy, do not forget that there is an intoxicating aroma hidden behind her pure, serene beauty."

"Our heroes found this Cookie upon a white lily glade. What could have happened to her...?"

In the tutorial prologue, White Lily Cookie's Skill increases the team's CRIT% and summons 2 lilies which bloom into smaller lilies after a short delay, dealing damage to enemies. This Skill has a 15 sec Cooldown and may change in her full release. 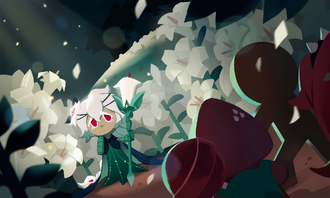 Unlike her cheerful and outspoken

companion, White Lily Cookie is considerably more gentle and soft spoken, often speaking in a soft tone and keeping most of her thoughts to herself. It is implied that White Lily Cookie wasn't particularly liked nor even accepted by her peers, especially compared to the naturally congenial Pure Vanilla Cookie. Even while the reputations of the two differ, they remain close friends with a strong bond. White Lily Cookie is noted to be academically intelligent and was an exemplary student, often scoring first amongst her peers in her academy years. Because of this, she would skip class in favor of her personal research, as she felt that she gained little from the education taught in her classes. White Lily Cookie is full of curiosity, stopping at nothing in the pursuit of answers, especially in regards to the subject of the creation of Cookies. Her curiosity, however, led her to cross moral boundaries irresponsibly, which would ultimately lead to the harm. Upon remembering what she'd done in the present, White Lily Cookie realizes the immense pain that her actions had brought, viewing herself as unforgivable once she realizes where her path had taken her.

Certain you wish to see more?
This article contains story spoilers. Proceed at your own risk!

Throughout Episodes 7 and 8, it is revealed that both White Lily Cookie and Pure Vanilla Cookie were researching the origin and creation of Cookies, to the point that they broke numerous academy rules and attempted to create living Cookies on their own. Pure Vanilla Cookie would eventually put the research to a stop, while White Lily Cookie would continue to study by herself, her experiments ultimately converting the academy's inhabitants into spirits by accident.

She would later travel to the Tower of Sweet Chaos on the Night of the Witches to impose a question regards the reasons cookies were created, but instead learnt that Cookies were originally made to be eaten. She fell into the Ultimate Dough, unable to accept this fate, and was thus rebaked into a new Cookie:

It is unknown if any remnant of White Lily Cookie still exists in the present.