Werewolf Cookie (Korean: 웨어울프맛 쿠키, weeo-ulpu-mat kuki) is an Epic Cookie available since launch. He is of the

Charge type and his position is prioritized to the

Espresso Cookie's portion of the Parfaedia Institute Event in which he delivers Espresso Cookie's spell reagents. He also appears as a supporting character in The Best Spring Picnic Ever where he is roped into attending a picnic by

"Together with a great amount of pepper, a wolf hair had fallen into the cookie dough by accident. Now, whenever Werewolf Cookie feels scared or threatened, his wolf instinct kicks in to transform him into a feral beast. A long time ago, when a friend was in great peril, Werewolf Cookie managed to save them by transforming, at a cost. With his true nature revealed to the whole town, he was cast away out of fear and has been living alone in the forests since. With so much pain inside, this Cookie tastes bitter and salty (of tears). Don't ask about his scar or try to get close, as he will only push you away..."

Werewolf Cookie has warm grey hair and cyan blue eyes, along with a scar on his left cheek. Under his white vest and black cape he has a gray shirt with a wolf's tooth necklace and grey tattered pants.

In his wolf form, he retains his cyan blue eyes and tattered pants while taking a hulking wolfman appearance with claws. 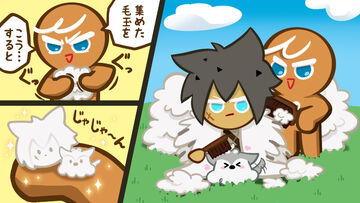