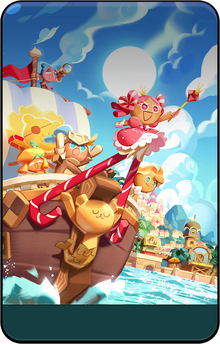 It is unlocked once a player rebuilds the Soda Harbor in their Kingdom.

Initially, the map will be covered entirely by clouds. Each region of the map must be explored using Map Fragments and Caramel Spyglasses, which will permanently open that region and reveal either an island or a treasure chest. Discovering and opening Rainbow Soda Islands unlocks further territories that can be explored. Treasure chests contain a preselected group of rewards, while islands contain pirates.

Some clouded regions will appear to have a bottle rising out from them. These regions contain Rainbow Soda Islands, which must be explored to expand the selection of clouded regions that players can explore.

When an island is revealed, players can choose to field a team of Cookies to battle the enemies found on that island. These stages are about twice the length of a World Exploration stage, and are primarily composed of enemies exclusive to the Tropical Soda Islands. Each island has its own unique enemy wave order, which is retained if the island is recaptured by pirates.

If a Cookie team is defeated in the middle of the stage, the player retains their progress on that island. Fielding another team of Cookies will begin the battle where the player last left off, except that the last wave of enemies will be fully revived. Island progress will not be saved if the players surrenders or quits the game during a battle. 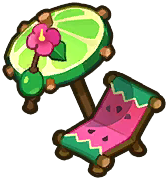 If a Cookie is defeated in a Tropical Soda Island battle, they will become soggy, and cannot participate in battles in the Tropical Soda Islands until they have been dried on a Sunbed. Sunbeds are located at the first island available to players, and can accommodate any number of Cookies. Cookies will take a number of hours to dry based on the difficulty of the island or boss that defeated them, with higher difficulties requiring more hours to dry off.

Upon fully clearing an island of enemies, the island's village becomes liberated. Each liberated village produces rewards based on the island's type, with Coconut and Mangosteen Islands in further regions producing more Coins and Star Jellies respectively. All rewards produced are delivered to the Kingdom every 8 hours.

Pirates may recapture islands, which will prevent their rewards from being added until the island is cleared again.

Episode are listed as shown in the Tower of Records. Episodes 1-9 are unlocked after exploring certain clouded regions, while episodes 10-25 are unlocked through the achievement event above.