Tropical Raids is a game mode located in the Tropical Soda Islands where players and their friends collaborate to defeat Raid Bosses, earning rewards in the process. It is unlocked once a player experiences each of the following modes: World Exploration, Today's Bounties, Kingdom Arena, Tropical Soda Islands, and Tower of Sweet Chaos. A player must win at least once in each mode except for the Arena to unlock Tropical Raids.

This mode runs on a seasonal basis; between seasons, Raids are closed for maintenance. Tropical Raid Seasons appear to occur irregularly, with no guaranteed amount of time passing before a Season ends and another begins.

A Raid has a chance of opening for a player after they clear any battle in the modes mentioned above. Once unlocked, it will remain open for 3 days. Both players and their friends have access to this raid while it remains open

In a Raid, players must defeat all of the Elites in order to battle the Boss. Defeating an Elite grants Cookies a special buff for the remainder of that Raid.

Cookies defeated during a Raid Battle will become soggy, and all Cookies in a raid battle they don't finish will also become soggy. Soogy Cookies need to dry on Sunbeds, and cannot be used in either Raids or Tropical Soda Islands in the meantime. The amount of time a Cookie needs to dry on a Sunbed is based on the Raid's level. 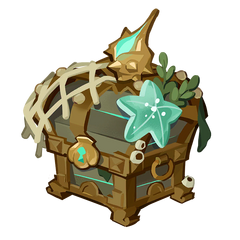 Completing any battle in a Raid rewards a small amount of Kingdom EXP, Coins, and EXP Star Jellies based on the Raid's level, regardless of the outcome. Players can earn this reward up to 30 times each week.

Participating in a friend's Raid contributes towards unlocking a Weekly Help Request chest. Each chest requires 10 Raid battles to unlock, rewarding Rainbow Pearls, EXP Star Jellies, and a large number of Deep Sea Keys. Players can open up to 3 of these chests each week, with the second and third chests containing more rewards.

Upon defeating the Boss, players earn EXP Star Jellies, Rainbow Pearls, and Deep Sea Keys based on the Raid's level, as well as a separate bonus amount based on their contribution ranking amongst all the players who participated in the Raid. If players fail to clear a Raid before it expires, they'll instead earn a consolation reward based on the percentage of HP damage dealt to it.

500 Deep Sea Keys can be used to open a Deep Sea Chest, which can contain items randomly picked from a predetermined pool: