Tiger Lily Cookie (Korean: 정글전사 쿠키 jeong-geuljeonsa kuki) is an Epic Cookie available since launch. She is of the

Ranged class and her position is prioritized to the

Princess Cookie. She is estranged from all of her family due to being lost at birth.

Tiger Lily Cookie makes an appearance in Grandberry Market, appearing before Princess Cookie and nearly recognizing her before fleeing. She appears briefly at the end of Hollyberry Palace, hiding in a bush to watch Jungleberry Cookie. She also makes various cameo appearances in Stage backgrounds in both Episodes.

"It is not known how Tiger Lily Cookie ended up in the jungle all by herself. Under the constant threat of encroaching enemies, her senses grew sharp. In contrast to her rough outward appearance, she is soft and delicate on the inside. Her only family is her trusty Butter Tiger, whom she cherishes more than anything in the world. Her great skill with the spear and excellent jumping abilities make her one tough Cookie to beat." 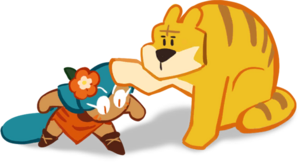 Tiger Lily Cookie has long teal hair that curls slightly at the end. Her bangs are parted in the middle, and she has wide eyes with thin orange-brown pupils and a single eyelash on each eye. She wears an orange hibiscus accessory on her head that is accompanied by two dark green leaves.