Parfait Cookie (Korean: 파르페맛 쿠키, parupe-mat kuki) is an Epic Cookie released in the second part of the Soda Island Outlaws update (version 1.9.002). She is of the

Support class and her position is prioritized to the

She stars in her own dedicated Story Event, Parfait Cookie's Story, and her own song, Everything You Need.

"In a time when there's never a day without a new hot celebrity idol, this singer-songwriter Cookie desperately tries to stick out with sweet toppings in vivid colors! Parfait Cookie's distinct style involves layers of chocolate and candy, topped with dripping syrup. Despite still being a rookie, this Cookie already has dozens of self-written songs. Parfait Cookie's melodies may be just as creative and unique as her colorful mixture of toppings, but her lyrics are always as pure and honest as vanilla ice cream. "It doesn't matter if the audition goes bad, if no one recognizes me, or even if my toppings melt in the summer rain! I keep playing my guitar and sing about the truth in my heart."" 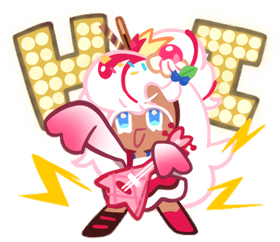 While in her stage getup, Parfait Cookie has white, puffy hair styled in a half-up half-down hairstyle with many toppings, along with pink syrup. The body of the two-stringed guitar she holds is carnation pink, with magenta tuning keys; it also looks to have a waffle-cone texture. She has vibrant blue eyes with big, bushy eyelashes. She wears a white cold-shouldered tube top with thin blue straps and oversized sleeves ending with a pink ombre and scallop pattern, a red skirt with a white waistband and brown detailing at the hem, and a pair of boots; one of them pink and the other black with pink laces.

Without her stage getup, she wears a black shirt with a motif on it and her hair lacks toppings and becomes messy. She wears a pair of brownish-black sneakers. Her eyes become brown. She also wears a set of pink glasses.