Tails Cookie in the second part of the Heart of Courage and Passion update (version 2.0.102). She is of the

Defense class and her position is prioritized to the

"Fresh rice harvested from the happy soils of the Cookie World was used for baking the happy Moon Rabbit Cookie. This Cookie's chubby cheeks are always filled with sweet rice cakes. And while some may think it's cute, her craving for more rice cakes might be one of the strongest forces of the Universe. That craving can even become so strong that she might turn into a giant Rice Cake Bunny, and—oh boy!—you'd better keep your distance because she is going to wreak SWEET HAVOC. A group of particularly brave Cookies once tried to keep the giant Rice Cake Bunny in check by grabbing each other's hands and building a circle around her. Ever since, the Cookies have kept a tradition of holding hands and going around in circles under the full moon." 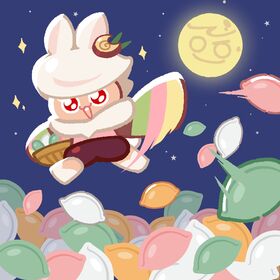 Moon Rabbit Cookie is a short Cookie with pale dough and scarlet eyes. Her hair is styled in a pixie cut with sweeping bangs that overlap her eyes and takes a porcelain color much like her dewlap and tail; all of this "fur" seems to be solid, globular masses similar to rice cakes rather than true hair. She also wears a swirled jujube barrette with two fronds against the bunny ears atop her head. Her lips takes an animal-like cat's mouth shape and sport a single round tooth at its center.

In her animal form, Moon Rabbit Cookie appears as a simple, rotund rabbit made of flabby rice cake batter. Her ears and barrette are much the same as her Cookie form, though her eyes are now simple crimson dots and she has only two slight paws. Her face altogether is quite small and is positioned high on her round body.