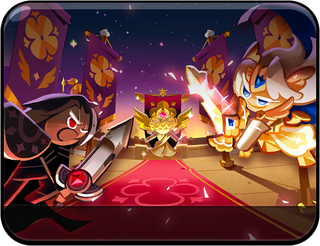 Kingdom Arena is the main PvP mode of the game, where players use their Cookie teams to battle other players' teams. Defeating other players rewards Trophies, which determine the player's Tier, and

Medals of Victory, which can be redeemed at the Medal Shop for valuable items and Soulstones.

Master class Tier in an Arena Season rewards a Decoration exclusive to that Season, while

Medals of Victory are rewarded at the end of the Season based on the player's Tier.

In the Kingdom Arena, single teams formed by players are pitted against each other. Arena battles are always done on Auto-mode; players cannot influence the battle through manual timing of skills and non-auto Treasures. Instead, players must combine ideal synergies of Cookies and Toppings in order to defeat a variety of other player-created Cookie teams.

Players must also set a Defense team, which others will battle when choosing the player as their contender.

Players can choose from a list of 5 contenders for their team to battle; the contender list may be refreshed every 30 minutes, with the Kingdom Pass reducing this to 10 minutes, and dropping or going up a Tier or battling all 5 contenders will refresh the list automatically. The list may also be refreshed without waiting for 300

Silver III, tapping "Defenders" allows the player to choose Hidden Cookies for their defense team. This obscures the identity of up to one chosen Cookie from attacking players. Starting from

Crystal III, up to two Cookies can be hidden instead.

Players may use this feature to disguise the composition type that their defense team is running, typically allowing the most popular Cookies to be visible and instead obscuring roles that contain key parts of their strategy. Attackers must use all other available information to best guess the composition that they're facing, such as the power level of the defense team, the remaining Cookies and their placements, the Treasures chosen, and the trends of the current Arena metagame.

Master II and beyond, players' Kingdom names and profile pictures will also be scrambled. Only the first number of their team's Power and the first two numbers of their Trophy counts are shown.

Each battle requires the player to spend an Arena Ticket. Arena Tickets automatically recharge at a rate of 1 Arena Ticket every hour by default, up to a maximum of 8, although a player may hold an unlimited number of Arena Tickets if earned from other sources.

Crystals may be spent to recharge 8 Tickets instantly, up to 5 times per day.

Most Tiers require 100 Trophies before allowing ascension to the next Tier, with Diamond Tiers requiring 200 Trophies, and Master Tier comparing the player's Trophy amount to all other Master Tier players in the server. At the end of each Season, half of all Trophies are lost, while end-of-Season rewards are given out based on one's final standing before the half-subtraction.

Medals of Victory are a special currency exclusive to player-versus-player modes that can be earned from victorious Attacks and Defenses in the Kingdom Arena. Medals are spent in the Medal Shop in exchange for exclusive, rare items. Players are also rewarded Medals each day based on their current Tier, which are delivered in a player's Mailbox. Medals carry over between Seasons.

The Medal Shop is where Medals of Victory can be exchanged for various rare items. It refreshes once every 3 days.

Reaching a new Tier each Season rewards a one-time gift of Crystals alongside a separate reward. The higher the Tier, the more Medals earned as a daily reward, and the more Crystals and Medals received at the end of the Season.

Arena Seasons are typically named after recently-released Ancient or Legendary Cookies. The Decorations and Profile icons shown below are currently unobtainable by any means; only the Decoration of the current Season can be obtained, via reaching Arena Tier

Master V, and the standard and special icons of the current Season can be obtained through participation and reaching the top 500 in the Arena's leaderboards during the Season respectively.