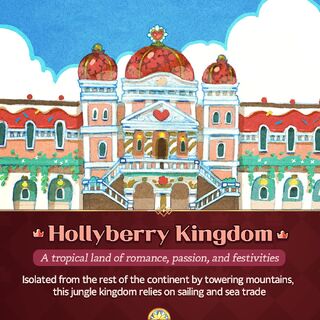 The Hollyberry Kingdom is a kingdom founded by

Princess Cookie being its princess. It is also the birthplace of

In general, this kingdom is likely based on Southern European nations such as France, Italy, and Spain. 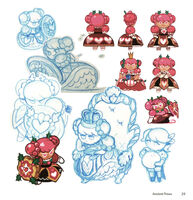 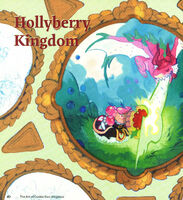 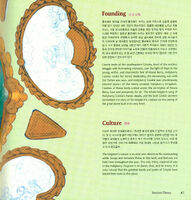 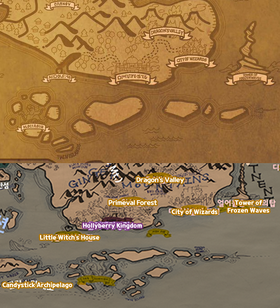 The Hollyberry Kingdom is located on the continent of Crispia in the Cookie Kingdom. It is located on the southernmost edge of the continent sitting on the coast of an ocean/sea; it is unclear which body of water is being referred to, but it may likely be the Jellyfish Ocean. The kingdom lies adjacent to the Dragon's Valley and the City of Wizards with the Tower of Frozen Waves off of its coast. The nearest kingdom in relation to the Hollyberry Kingdom is the Dark Cacao Kingdom to the north-northeast.

According to a draft version of the Cookie Kingdom World Map, it also is surrounded by the Primeval Forest and the Little Witch's House, with part of the Candystick Archipelago nearby.

Berries of All Kinds

The Hollyberry Kingdom was founded by its namesake, Hollyberry Cookie, after she defeated an adversary besieging southeastern Crispia. While the game makes it clear that this foe was the Pitaya Dragon, the artbook states that it was "the Tortan", a force never mentioned elsewhere in any media.

The Hollyberry Kingdom is likely based on Southern Europe, namely France, Italy, and Spain.

The word "chateau" is a French word that translates to "castle" in English, and the Raspberry Chateau is a remarkable place in the kingdom. The popular canapés and puddings are most likely inspired from France, and so are the dresses the Cookies wear. France also has many forests, which is probably what inspired the Cranberry Forest. The word "dragon" itself comes from Old French.

The languages of these nations are known as the "romance languages", tying back to the Hollyberry Kingdom's theme of passion and emotion.

Hollyberrian Cookies also often use words and quotes from the French language.

Shortly before Hollyberry Cookie's desertion, the king and queen had two daughters; Princess Cookie and Tiger Lily Cookie, who were graced as the princesses of the kingdom. Just after their birth, however, Tiger Lily Cookie was lost in the wilderness as an infant, and has been lost and estranged from the Hollyberry royal family ever since. When she came of age, Princess Cookie would go on her own adventures outside the kingdom, accompanied only by

Due to the lack of any passionate royal defenders who could wield the Hollyberry Shield, the Pitaya Dragon was able to return to the Kingdom unopposed, and was made the ruler of the Kingdom in exchange for not destroying it. The absence of any true heirs was so pronounced that a Princess Contest was held to find a worthy bearer of the Hollyberry Shield, one that anyone could join so long as they passed the trials. 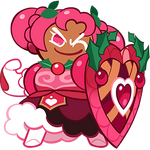 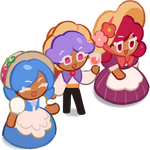 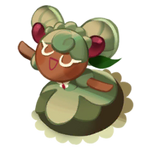