GingerBrave (Korean: 용감한 쿠키, yong-gamhan kuki) is the main protagonist of Cookie Run: Kingdom and a Common Cookie available since launch. He is of the

Charge type and his position is prioritized to the

He is the main protagonist for World Exploration, leading his friends through the story. He is also the poster character for the game and franchise as a whole, appearing in the app's icon, loading screens, and more.

Being the first character in the game, he begins the First Cookie Legion.

"GingerBrave was the first Cookie to escape from the Witch's oven. It is unknown how this Cookie came to life, but rumor has it that the Witch accidentally used magic powder instead of ginger powder."

*Enemies struck by this Skill are knocked back a short distance.

GingerBrave has blue eyes and a red smile. On his head is a tuft of white hair. He has skull shaped buttons on his stomach and carries a white candy cane with red stripes. 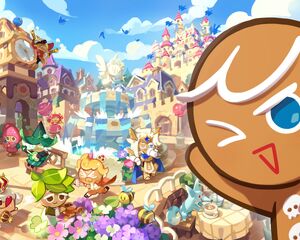 Being the protagonist of his story, GingerBrave is depicted as friendly and highly empathetic with a clear sense of justice. Due to his nature, GingerBrave gets along well with most everyone he encounters, even nearly convincing

Dark Choco Cookie himself to join his group against Dark Enchantress Cookie. GingerBrave deeply cares for everyone who he deems as friendly—or, at least, those who aren't his direct enemies. He is willing to dive back into danger to save his companions, as he strictly sticks to his motto of "no Cookie left behind". He also doesn't hold back when confronting

Dark Enchantress Cookie's subordinates, most notably with the callous

Being extraordinarily brave, GingerBrave is seen as a beacon of hope by his group and his other allies due to his unwavering determination when it comes to facing every challenge on his way. In situations where all seem lost, GingerBrave is the one to inspire his allies and gather them to defeat their foe.

Despite being a symbol of bravery and hope, GingerBrave's experience with being one of the first to escape the Witch's oven still silently haunts him to the present day. He attempts to shield others from the horrible truth of existing to be eaten whenever appropriate to keep their hopes and wills high and alive.