The Dark Cacao Kingdom is a kingdom founded by

Dark Cacao Cookie. Due to the denouncement of his son and the kingdom's prince,

In general, this kingdom is strongly based after East Asia, specifically China, Japan, and Joseon-era Korea. 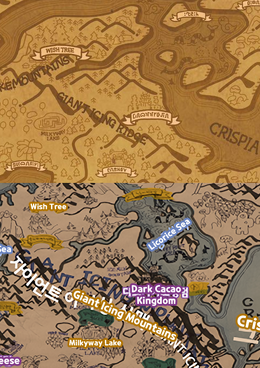 The Dark Cacao Kingdom is located on the continent of Crispia in the Cookie Kingdom. It sits on the eastmost segment of the continent with the Jellyfish Ocean bordering it to the right and the Licorice Sea with an unlabeled offshoot river to the northeast. It is sheltered to the southwest by the frigid Giant Icing Ridge. Some adjacent landmarks are the Wish Tree, the Cream Cake Mountains, the Milkyway Lake, and what appears to be the Tower of Sweet Chaos. The nearest other kingdom is the Hollyberry Kingdom to the south-southeast.

While the Licorice Sea is labeled only in gibberish text in the final Cookie Kingdom map, the draft map reveals its true name.

The Dark Cacao Kingdom's pairing of high mountains with expansive surrounding seas is reminiscent of Japan's own geography.

The architecture of the Dark Cacao Kingdom strongly resembles that of Korea's Goryeo (918-1392) and Joseon (1392-1910) dynasties, leaning more towards the Joseon style of architecture.

During the Goryeo period, Buddhism was at its most influential in Korea's history, and the importance of religion strongly affected the period's architecture. Numerous temples and pagodas were constructed to accommodate religious needs, with the vast majority of pagodas being made from stone due to the nation's abundance of granite.

The Joseon dynasty followed directly after the Goryeo dynasty and thus still had the previous period's architecture, though the change of those in influential positions caused the architectural style to change accordingly. Those in power stressed an importance of practicality and frugality similar to the Dark Cacao Kingdom's own sense of values.

The Kingdom of the Unwavering decoration theme is based off of the Dark Cacao Kingdom and contains decorations described as simple, elegant, and modest. The description for the Royal Feast Table states that the kingdom's denizens value modesty above all and vastly prefer neat, simple looking things as opposed to fancy embellishments.

This Dark Cacao decor may be based off a Korean cultural ceremony known as Jesa (제사), or ancestral rites. Jesa is a ceremony where Koreans act as if they are talking to their passed ancestors as they put food on the ceremony's table. Jesa is also usually celebrated at an anniversary of the ancestor's death, during which the dearly departed's favorite foods and drinks would be offered on the table.

In Citadel of the Frozen Cliff, the painting of The Sun, the Moon, and Five Peaks resembles the painting of the same name, or Irworobongdo. The painting is also seen in the throne hall, and with the hall itself directly being based off of the Phoenix Throne in Gyeongbokgung.

Dark Cacao Cookie is widely regarded by the kingdom's people as its king rather than a more democratic type of leader, often being specifically called "King Dark Cacao Cookie".

The following are tribes and villages whose lands fall within this kingdom's borders. 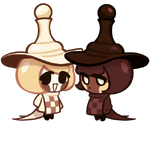