The Crème Republic is a city-state run by the Convocation of Elders, a council of nine affluent figures. Situated on the coast of a landmass separate from the main Cookie World, it enjoys a peaceful and mild climate that allows culture, commerce, and magichanical technology to thrive.

The birth of the Crème Republic dates back to the turbulent and grim times of the Dark Flour War. Before

Dark Enchantress Cookie's performing assault on the Vanilla Kingdom, citizens fled from the oncoming chaos on an airship. Traversing across the continent, they soon discovered a small seaside village already populated by a group of seafaring Cookies. Together with the villagers, they built a new nation and created the Crème Republic.

The Crème Republic is lead by the Convocation of Elders, a council of nine elders supported by one consul. The consul is elected by the elders. 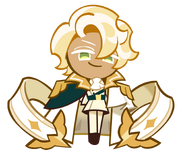 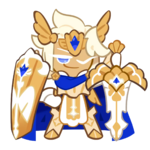 The Republic awaits!
This section contains major story spoilers for Cookie Odyssey. Proceed at your own risk!

Relations Between the Towns

Relations between the two groups in the Republic seem to be tense. Many inhabitants from Choco Mud Town do not wish to learn about the Divines, as seen in Chapter II of Cookie Odyssey, ⁣when Missionary Cookie wants to help the impoverished Cookies of the Lower City by suggesting they convert in order to live a better life in the Upper City. Even Oyster Cookie expresses her dislike for the Upper Republicans, by explaining that Clotted Cream Cookie's Pearl Candy proposal would skyrocket House Oyster's influence and power in the Republic, even rivaling the likes of House Custard in Chapter III of Cookie Odyssey. She then says that she wishes to see the faces of the other Council members when this happens, as she wants to get back at the Vanillians who established themselves on the territory and claimed it as their own.

The Paladins of the Crème Republic use the "Light" of the Divines in battle, with examples being