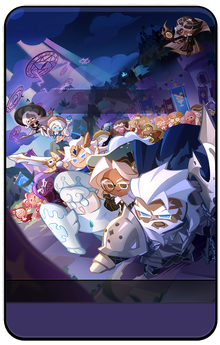 Cookie Alliance is a seasonal mode where players prepare up to 5 Cookie teams and battle numerous waves of enemies. It is unlocked when the player clears 10-31 in World Exploration and requires Alliance Tickets to participate, recharging at a rate of 1 ticket every 12 hours.

It is recommended to have a blessing by the Beacon of Valor active before beginning a campaign, as it cannot be used mid-campaign. Cookies in a campaign cannot change or remove their Toppings, but can still be upgraded or promoted, or have their current Toppings upgraded.

Cookies battle in auto-mode. A player can swap from their active team to any of their other 4 teams, incurring a 20 second team swap cooldown.

Cookies will run and face wave after wave of enemies, with every 4th wave containing a boss (such as a powered-up Cookie, or the Red Velvet Dragon). Enemy waves are set for each season, featuring unique enemy compositions with their own buffs. Every 4 waves also has a unique debuff affecting the player's Cookies, such as reducing DEF, disabling HP Shields or extending all cooldowns.

A player can quit mid-campaign at any time, which pauses their current progress, and can resume the campaign where they left off. Campaigns end once all five Cookie teams have been defeated, or if a player defeats the final wave of enemies. Players can also press "Restart" on the main Cookie Alliance screen to end their current campaign and receive rewards based on their progress.

In each campaign, the following effects will be applied:

At the end of the campaign, the player is offered to choose between two chests containing a Relic, Coins, Time Jumpers, and other random rewards. The rarity of the Relic will be rolled based on the last boss wave cleared. They may spend an Alliance Ticket to also open the second chest.

Score is tallied based off of the number of non-summoned monsters defeated, with bonus points rewarded for clearing waves without losing a Cookie team. Minor bonus points are also rewarded based on the time spent clearing the wave.