Chili Pepper Cookie (Korean: 칠리맛 쿠키, chilli-mat kuki) is a major deuteragonist of Cookie Run: Kingdom and an Epic Cookie available since launch. She is of the

Ambush class and her position is prioritized to the

She is guaranteed to be obtained through a free, fixed-result Cookie Cutter at the beginning of the game.

"Chili Pepper Cookie's dough contained much more chili pepper than allowed by the law. This is probably why she doesn't care much about rules at all! Chili Pepper Cookie is a notorious treasure hunter. She never misses a chance to snatch everything valuable she can get her hands on, leaving only chaos and havoc behind. The Cookies know better than to cross her path, and so should you. Good news: you can easily identify this path by a trail of fiery red chili sauce..."

Targets hit during the skill are also Immobilized.

Chili Pepper Cookie had long crimson-red hair with occasional beige specks pulled back in a high ponytail with a spiked band. She also has ruby eyes with a pronounced X-shaped scar above her right eye. She sports a muted red bandanna with crossbones printed on the front; and, most notably, she wears a black figure-hugging sleeveless jumpsuit that has several leather straps with belt clasps running around her legs and hips. When in battle, Chili Pepper Cookie holds curved daggers that have red blades with a singular notch and forest green hilts in such a way that resembles a bird's eye chili pepper. 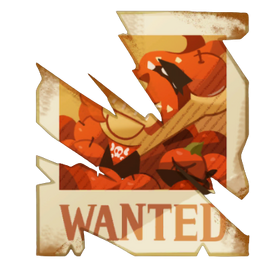 Due to her main ingredient being an abnormally large amount of hot peppers, Chili Pepper Cookie has quite the unapologetically brazen nature. Being a renowned petty thief, she's not above slyly tricking others solely to gain treasures and wealth. She's highly concerned with her notoriety as a criminal and is constantly working to stay on top as the best bandit of them all. Even after joining GingerBrave and company in their adventure, her primary goal of gaining as much loot as possible remains.