Pure Vanilla Cookie in the first half of the Lost Kingdom update (version 1.3.101). She is of the

Ambush class and her position is prioritized to the

"Harsh wind, crooked trees, streets ravaged by the war... Who is it there, hiding among the shadows? Black Raisin Cookie, the sole protector of the unfortunate remnants of a once-great Kingdom. Made of shriveled, wrinkly raisins, this Cookie has learned the value of survival no matter what. Even having lost one arm to the dangers of this rough barren, this Cookie keeps hunting for scarce food to feed those who put their trust in her. Despite all the hardships, Black Raisin Cookie doesn't lose the warmth of a Cookie heart: everyone deserves help, even a sorry one-legged crow. A new day is breaking, and another challenge is here. But Black Raisin Cookie will be there for the villagers, watching over them from the dark."

Black Raisin Cookie initially presented herself as distrustful and hostile, threatening away any by-passer she views as an intruder. She is also a skeptic and easy to distrust others, often jumping to the conclusion that said person is a threat to the safety of her village. This is due to the cruel and unjust area she lives in, where she has to fight for her own survival and the survival of her peers. 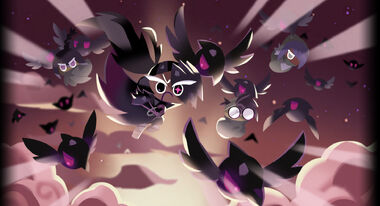 Having endured life in a harsh environment, gathered with the responsibilities to keep on a look out for her villagers, Black Raisin Cookie has adapted to become protective of her peers to the point of over-protective. Towards her villagers, she displays herself as loyal and reliable, willing to endure the hardest of obstacles to ensure the safety of her village. She is also noted to be selfless, not only prioritizing her villagers, but also other living creatures around her, such as giving whatever remaining food stock she has in storage. Once getting to know her better, she has revealed herself to be a gentle and caring individual, and is forgiving, as she has reconciled with

Pure Vanilla Cookie after their heated argument that caused the two to separate ways.