Dark Cacao Cookie in the first part of the Heroes of Dark Cacao update (version 2.7.102). He is of the

Bomber type and his position is prioritized to the

"One piping hot cup of dark roasted coffee and a frozen scoop of the sweetest vanilla ice cream! Born of two desserts—so different yet so delicious—Affogato Cookie's flavor is unparalleled! Neither coffee nor ice cream, Affogato Cookie spent restless years without a place to belong until he came up with a simple solution: to create a land of his own once and for all! He appeared out of nowhere on a frigid night in the Dark Cacao Kingdom and has been busy earning the trust and favor of the locals with the help of his strange concoctions and mysterious chants. These are troubling times for the Dark Cacao Kingdom and the throne is empty... What sinister intention is Affogato Cookie hiding behind his snide smile?"

Affogato Cookie appears to take the role of a ganshin (간신), a character archetype describing a royal retainer who's particularly skilled at persuasion and convincing their lord of their beliefs. Ganshin nearly always have an ulterior motive of usurping their magnate to personally inherit all of the power that comes with the role. This archetype is especially prevalent in both historical fiction and fact in China and Korea, such as with the case of the Ten Attendants.

In regards to his skills, appearance, and hobbies, Affogato Cookie may be based on a baksu mudang (박수무당), or a male shaman of the Korean traditional religion. Baksu mudang often have a particular healing property to them much like Affogato Cookie and his focus on his "medicines".

Affogato Cookie is a Cookie of standard height with deep brown dough. His eyes are a piercing white with dark, slit pupils. His sable lashes end with a round flourish and sit atop heavy eyelids painted with pale violet eyeshadow. The Cookie's mouth is small and pointed in a confident smile and his thin eyebrows slope downwards in a hint of sternness.

Affogato Cookie sports a pixie hairstyle save for one longer section of hair to his right fashioned into a braid. This loose braid holds just two tied sections before being held in place by a violet band and ending in a long arc of hair. At the nape of his neck, his hair ends in three upturned tufts. Most notably, a lofty bang and a loose strand suspended from it dramatically shroud his left eye. Affogato Cookie's hair takes a rich espresso tone as its base and is swirled with creamy white clouds of highlights at its edges, invoking an image of dark coffee drowning a scoop of vanilla ice cream. 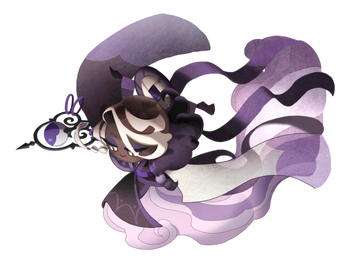 The shaman's attire is overall based in the Chinese hanfu (汉服) style and utilizes multiple layers. At the first, innermost layer, he wears a simple, colorless mamianqun (马面裙) skirt and atop it an ebony quju (曲裾) dress with a dull amethyst trim and pale collar for the second layer. The quju features scalloped designs at the hems of its sleeves against black gloves and is of a shorter variety in regards to its skirt, which reveals the mamianqun. At the third layer lies a beizi (褙子) (or perhaps daxiushan [大袖衫]) coat peppered with intricate designs and shifts in color. At its core, the beizi expresses a dichromatic color scheme of stark obsidian at the left sleeve and garment base pitted against cold alabaster at the right sleeve. Each expansive sleeve is emblazoned with a bulbous, bubbling form at their lower extents in a lavender tone. The dark base subtly flares outwards at its bottom, sports a mauve trim and a stylized orchid and slate shoulder piece at the left, and features a falling aubergine gradient behind an indigo linear arrangement of mountainous arcs and lone points. The latter design in particular bears resemblance to the Sun, the Moon, and the Five Peaks of Dark Cacao legend. This beizi and all layers beneath it are tied down with a slight indigo band at Affogato Cookie's waist, serving as a bright focal point amongst the mass of black and white. Finally, the fifth and topmost layer consists of a luxurious sable fur boa dusted with iris violet. Draped over the shoulder of the pale sleeve to the right, the fine fur ends in a pearl clasp at Affogato Cookie's chest.

Affogato Cookie's headpiece is likely inspired by feminine Ming dynasty and Manchu headdresses like the fengguan (鳳冠) and liangbatou (两把头) respectively, with some aspects of modernization like those seen in Chinese television historical dramas. It could also be derived from simple hairpins, an accessory deeply ingrained in Chinese hanfu style. That being said, the headdress consists of a round base set at the upper back of Affogato Cookie's head and a thin horizontal shaft likely made of metal. The base, which emulates the sigil commonly associated with Affogato Cookie and his followers, takes an aperture-like appearance: it consists of a diamond-shaped, rebecca purple gemstone at its center, an inner circle of cream broadcloth layers, and an outer rim of violet-grey anchorage. Sprouting from the base, the symmetrical, iron-black rod casting horizontally out bends upwards at its extremities in a stylish, pointed flourish. Upon the rod sit two lengthy banners of purple ribbon which trail down Affogato Cookie's back.

The staff which Affogato Cookie uses to cast his magic appears not to be based on any specific historical implement from any of East Asia, more so simply being a generic magic wand of sorts styled to fit the aesthetics of the rest of his appearance. It is tall to the point of outsizing its owner and consists of a wrought iron base. The majority of it is a simple pole save for its top, which holds the main draw of the implement: a sphere surrounded by more arcing iron and other smaller details. The globe is pure white at its core and is half-covered by a sheet of dripping amethyst color once again invocative of a real-life affogato dessert. This core is offset by symmetrical curling fronds of iron sporting spikes that point outwards and two swinging rings of deep lavender on each side. It is held in place by a botanical base that connects to another diamond gem similar to that seen in the base of Affogato Cookie's headpiece.

Spending much of his life without "a place to belong", Affogato Cookie yearns for a place when he can live as he pleases. His plot to find this place involves earning the trust of

Dark Cacao Cookie and his advisors, becoming closer to the Dark Cacao Kingdom's throne. He sees

Caramel Arrow Cookie as both an obstacle to his goal and an undeserving recipient of Dark Cacao Cookie's attention. It is very clear he is after the king's throne, and is going to any length to get it, as far as getting the king to banish the First Watcher with his manipulative words. He appears to be very persuasive, seeing as though he has an entire team of disciples, two Shaman, and a priest who all worship him as if he was king.